As you know from my two previous blogs on the topic, I am all about being beautiful at any age and keeping a positive view of such things, but a recent AARP TV ad was so ridiculous on one particular point, I just had to speak up.

https://www.youtube.com/watch?v=wlNOW0qN1lA here’s the link to the “I’ve Still Got It” ad on YouTube.

You have to be 50 and over to join AARP but that is hardly the average age of an AARP member, so number one, I found it rolling-your-eyes amusing that they cast a female office worker who looked like she was in her early 40’s if that.  Strike one.  Then they had the female announcer brag about how nothing was slowing the office worker down from achieving whatever and that part was OK, but here was the ridiculous part.  This was the part how the announcer bragged about how the worker could run in 4 inch heels…at work!!!

Very funny.  I wonder what MALE copyrighter wrote that ridiculous line.  Any woman over 50 watching that would go “oh, please, give me a break”.  The reality is your feet start to hurt…A LOT… after you get older, and especially if you wore heels all through your 30’s and 40’s.  I don’t know any women over 50 who wear 4 inch heels to work as a regular thing, no less run in the things!  Yes, the heels look nice, but they are totally impractical in the workplace unless you are literally seated at your desk all day.

More to the point, I defy anyone to force down my throat the idea that suffering through 4 inch heels all day is some kind of badge of independence and strength like that AARP ad implied.  Poppycock!  That’s my real objection.  The commercial was unrealistic and untrue to the REAL WOMAN in that regard.  REAL WOMEN want comfortable shoes and can feel plenty attractive JUST THE WAY THEY ARE without having to prove anything.

I am actually quite a fan of Cybill Shepherd, an absolutely stunning model/actress who is a spokesperson for Easy Spirit shoes.  She gets it.  Easy Spirit gets it.  AARP – not so much.

Now, I have nothing against heels per se, but they hurt like heck if I try to wear them to a cocktail party when I am on my feet for two hours.  I did indulge in a bit of a fantasy purchase of 4 inch heels the other day at a killer DSW clearance sale and my accompanying $10 off coupon.  For twenty bucks, I bought the sexy heels shown in the picture and who knows when I will get to wear them.  But I had so much fun indulging my fantasy for a mere twenty bucks (marked down from $85 I might add!).  I looked at it like entertainment expense. 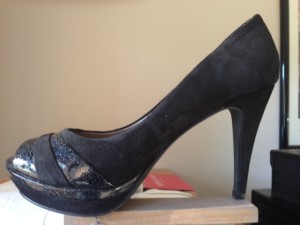 While I was in the store trying on said heels, one of the sales gals came up to me and asked me if they were comfortable.  I paused, then gave her a sidelong look and said “of course not” and she looked a tad shocked at my response.  I said to her “no one buys shoes like this for comfort; they’re only good for one thing”.  She laughed in a sort of embarrassed way.  I laughed.  I don’t mind dressing to impress on a sexy date once in a while, but shoes like that in the workplace – I think not.  Leave that to the young 20- and 30-somethings to whom comfort is not an issue.

In fact, I have a friend who is a successful commercial real estate agent in California, and she told me the commercial agents who show up in high heels, short skirts and flaunting cleavage are just not taken seriously in her business, period.  I’m not too happy about the discrimination inherent in that remark but I see her point.  When millions of dollars are involved in a commercial real estate deal, it’s all about the business deal and not the “window dressing” so to speak.  That was her point.  AARP, take note.  We don’t need to wear heels to prove our self-worth to anyone, ever.  And comfort rules!!!